What touring a virtual Atlanta apartment is really like

Atlanta entrepreneurs can show tenants how unbuilt spaces will look in the future. This VR experience is costly but mind-blowing, to say the least

Following an interview this week with Cameron Abt and Adam Chechila, cofounders of Atlas Bay — a "real estate visualization company" in Atlanta that uses virtual reality to show as-yet unbuilt spaces to potential lessees or tenants — the duo invited me to sit in a metal folding chair and begin our journey. They believe this service will fundamentally change real estate. I wanted a preview, to see if the hype is merited.

Before strapping on a high-end virtual reality headset, one quickly surveys the surroundings where he’ll soon wander. Because, in the real world there’s windows and walls. There’s a thick cord attached to the headset, always tapping at your heels. There’s finite square footage. And, in my case, there were spectators watching every awkward move as I lurched about in the land of Atlanta real estate make-believe.

Chechila handed me the device (an $800 HTC Vive), and I put it on. It felt tight at first, so I adjusted the straps. It weighed on my head like an overly heavy Halloween mask, rubbery suction cups pressed firm around the contours of my eyes and upper nose.

Upon blinking away the blurriness and getting a handle on my surroundings, I was instantly transported from a nondescript office space in Buckhead to a bright, immaculately clean room without windows. The metal chair I had been sitting in was now a plush-looking couch. At least to my mind it was. 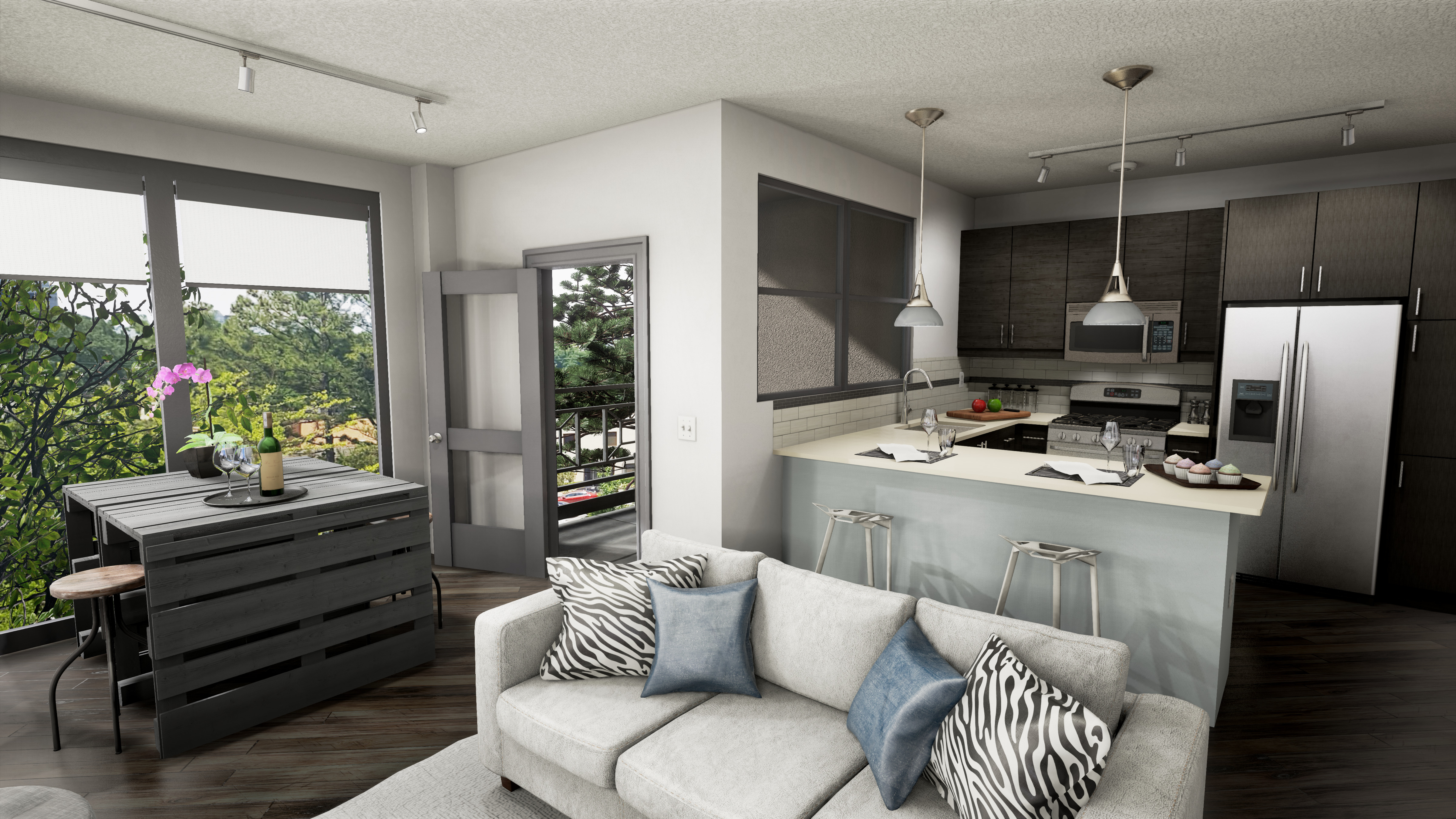 Atlanta-based Atlas Bay provides virtual reality experiences that aim to help clients and businesses see the way real estate will look before it's complete. In this instance, the product is used to help potential lessees or tenants see what it feels like to "walk through" a multifamily apartment complex before it's finished. Such projects are rising across Atlanta like mushrooms as we speak.

Written on the wall, right across from me in virtual space, there were a series of instructions and warnings, basically saying, "If at any time you feel dizzy, uncomfortable, or confused, take off the damn headset."

With one of the two handheld controllers I’d been given, I aimed a pointer at the disclaimer and clicked away the words with a trigger finger (solid beams project from either controller at all times to help one navigate, similar to the arrow of a computer mouse). 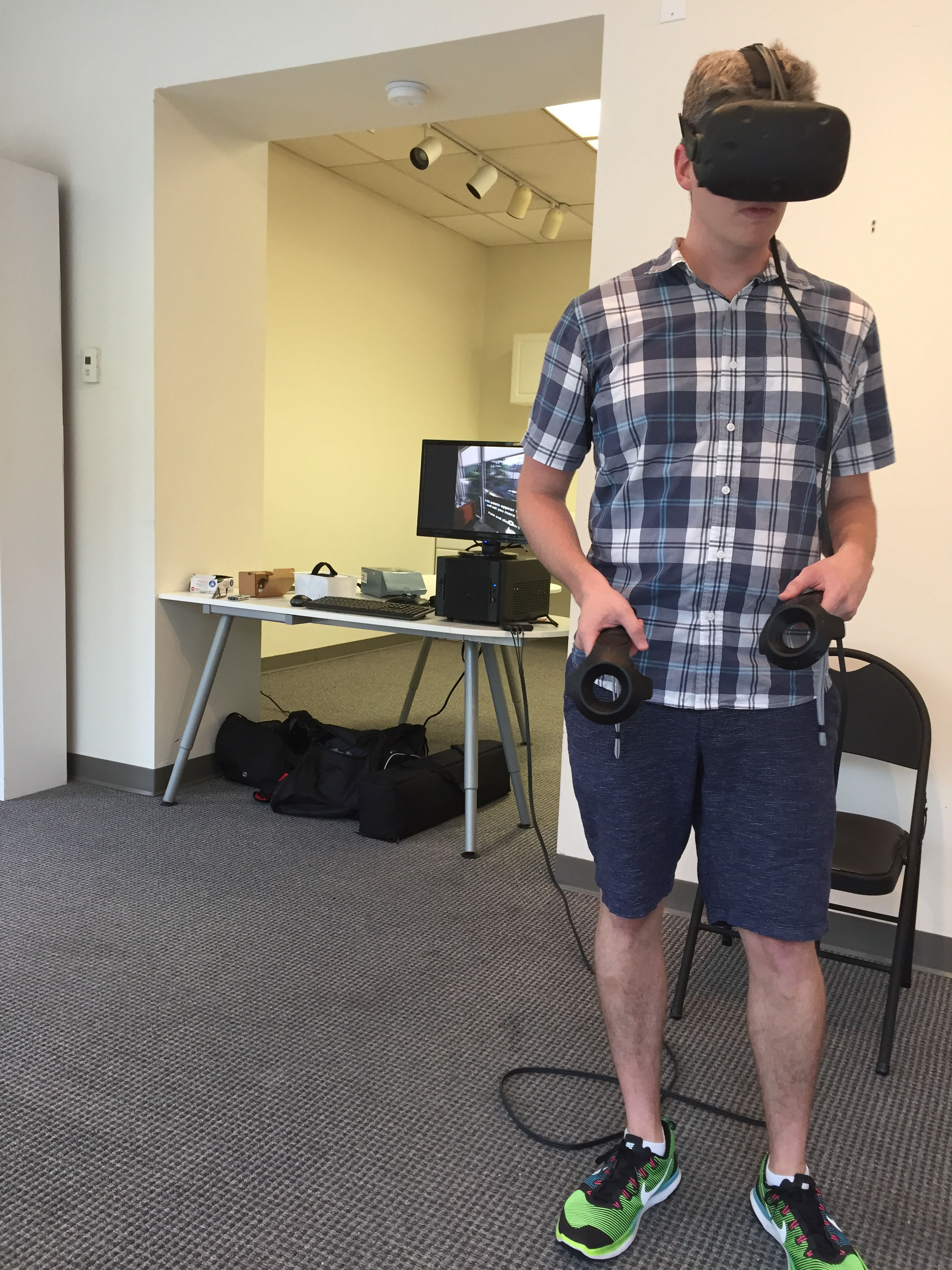 And then, as quick as you can blink, I was inside a very real-looking luxury apartment.

It's an entirely exciting yet jarring experience from the get-go — a novelty even to Chechila and Abt , who own this equipment and built this imaginary two-bedroom apartment where I’m standing.

"Every time we get in it, we’re still blown away by the technology," Chechila said.

Chechila and Abt recently launched the startup company, which provides clients this experience of virtually touring building spaces such as this, giving them the ability to physically walk the space and interact with the environment before it exists.

"This technology could be used during pre-leasing when the client can’t physically see the space yet," Abt said. "Sure, they can do hardhat tours during construction or look at 2D pictures of what it’s going to look like, but when you’re renting or leasing you want to know ‘how big is the closet going to be, or what’s the room going to look like when I step inside’ ... this technology allows somebody to visit the space and see how it’s going to feel."

So how does it feel? Almost like an actual tour. The space I navigated is very realistic, but not quite photo-realistic. It is, however, real enough to play tricks on the mind.

While walking through the virtual apartment, I found myself stepping around pieces of furniture without thinking about it. Inside a walk-in closet, I reached out to feel the fabric of a coat. I leaned forward in order to rest my hand on the kitchen counter, but caught myself and felt like an idiot.

What the mind sees, even in virtual reality, the mind processes as real. Oftentimes, impulses bypass logic.

Stepping out on the nonexistent balcony to behold the Buckhead skyline (a real photo stitched into the software), I looked down at the parking lot dozens of stories below, and my knees buckled a little. 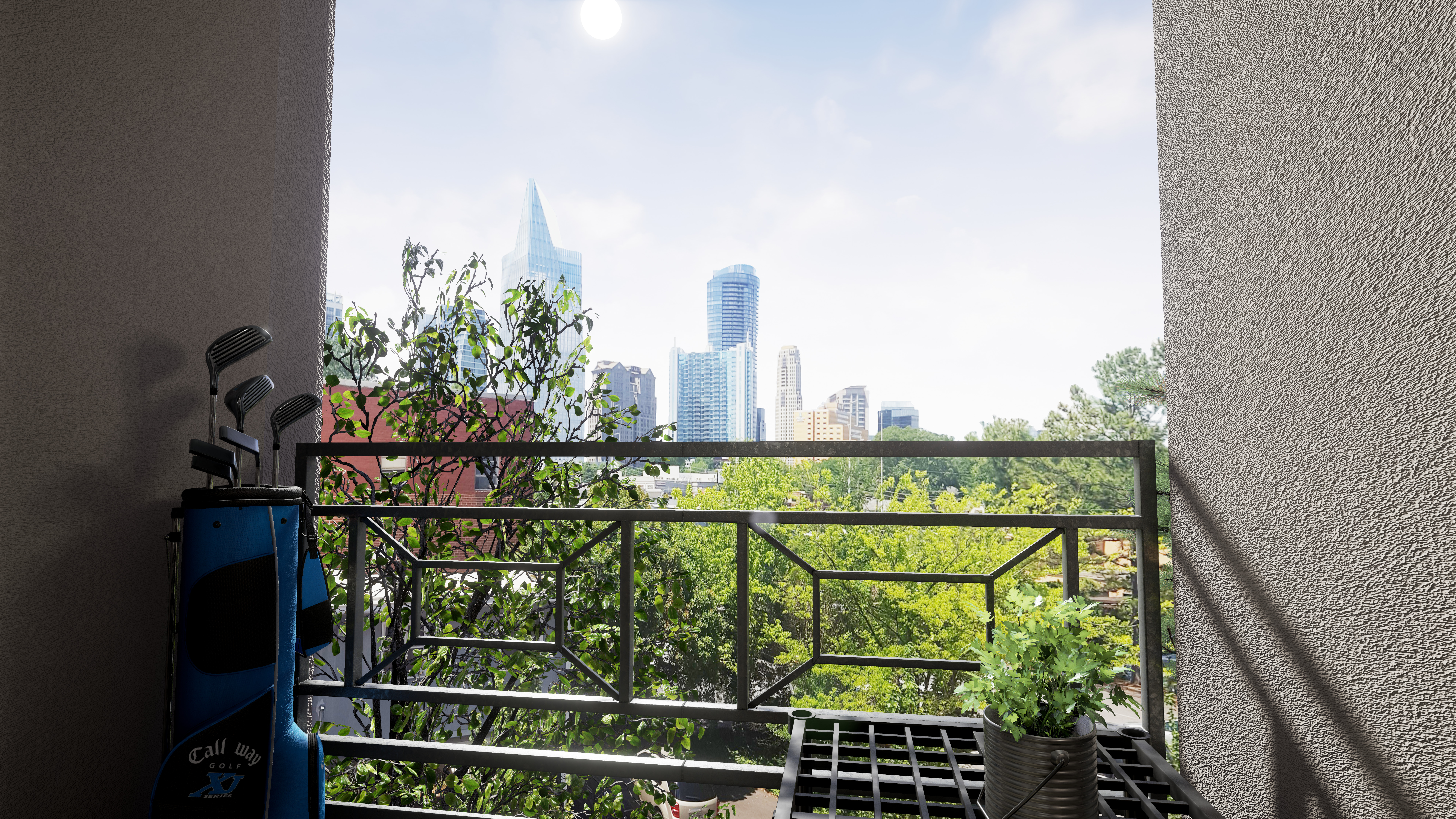 Abt, the company's CTO, said he himself has felt the fear of heights when playing around with the software.

"Back when we were creating the apartment, I was messing around and teleported myself off the balcony, and because gravity in this software is (as it is in this in the real world) I fell and my whole body just crumpled into a ball," Abt said, laughing. "It’s really freaky."

The finished version of the software I navigated Tuesday, however, would not have allowed that. There are visual boundaries, which are outlined in a semitransparent grid denoting barriers in the real world. This keeps the user from bumping into walls or falling out real windows.

Using the headset, first-timers are wont to be cognizant of these limitations at all times, taking toddler-like steps around the space. 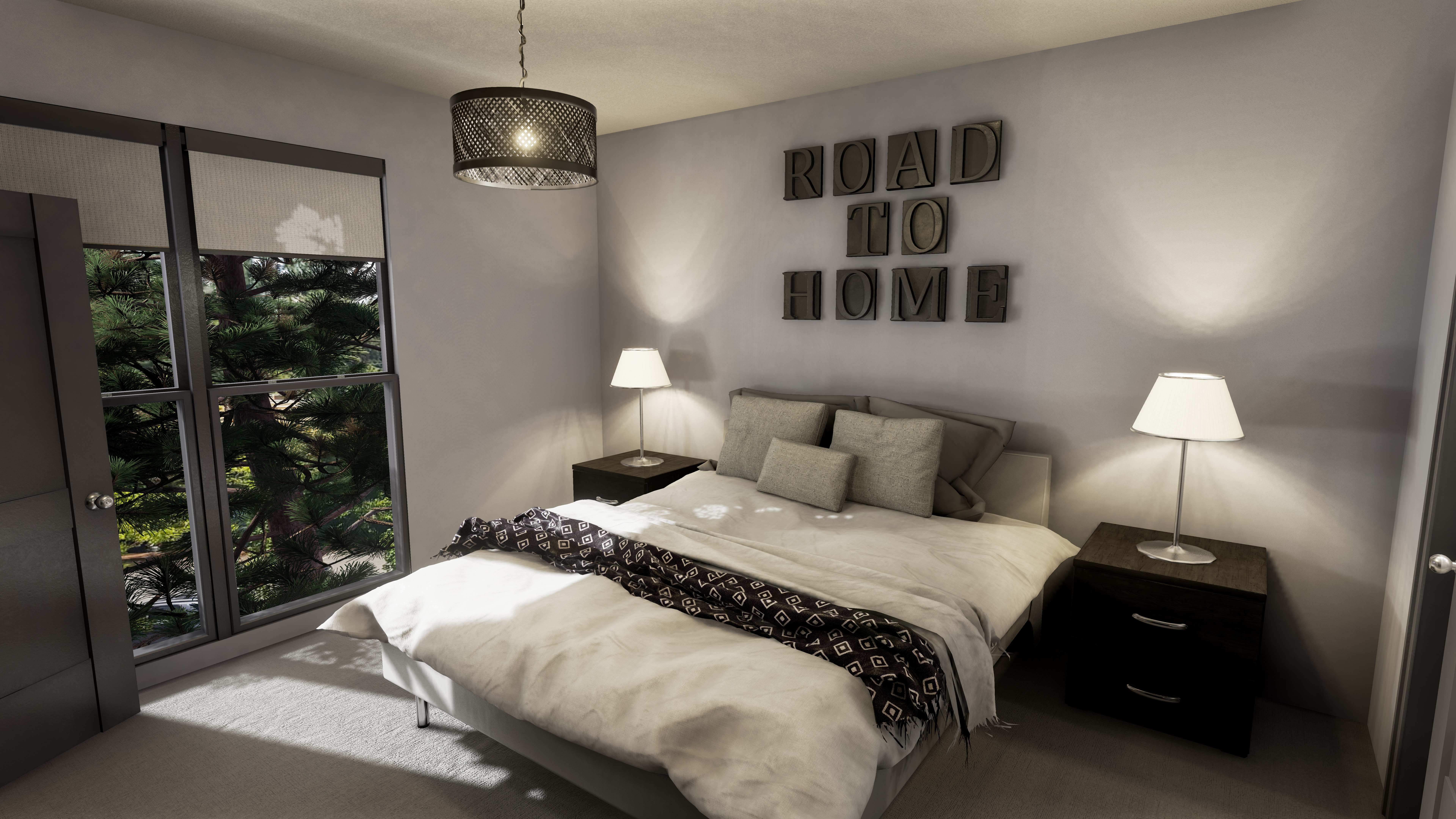 Chechila envisions that using virtual reality to view real estate will one day be a vital component of the pre-leasing process. For Atlas Bay to create a virtual apartment or other space for clients, it can cost anywhere from $5,000 to $50,000. It’s all dependent upon what type of experience clients seek.

Right now, we’re just trying to get people familiar and comfortable with this technology," Chechila said. "What we’re starting to find is that people have a lot of definitions of what virtual reality is. We’re trying to educate the consumer that there’s something like this out there ... that it’s less of a novelty and more of a sales tool.

While the HTC Vive and similar, recently released VR setups are available to consumers (expensively), most folks will use the headsets and programs for gaming. Atlas Bay’s commercial use of VR technology, its leaders hope, represents a new kind of future in business.

Some observers believe the virtual reality market could explode over the next decade; Goldman Sachs research suggests VR will be an $80 billion industry by 2025, the size of today’s desktop PC market.

Abt and Chechila feel they're on the cutting-edge, right here in Atlanta.

"This is the future," Chechila said, taking the VR headset from me and strapping it on himself. "We love this stuff, and we love showing people how amazing it really can be. It will be interesting seeing how this continues to evolve."

Abt chimed in: "It’s only recently this kind of technology has been available. It’s now at a point where we need to let everybody know it’s the real deal. It’s not a gimmick or a novelty anymore."

What Atlanta renters need to know during the coronavirus pandemic

View all stories in News